However, some aspects of it, such as the enthusiasm for legumes, pass the average tourist by - fave (large white beans) or lenticchie (lentils) probably seem too plain, too common. The same applies to baccalà, stoccafisso (dried fish) or frittata (omelet) and foccacia (flatbread) - you have to take a much closer look to notice these basic ingredients of cucina povera. 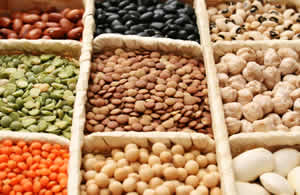 Whether it's pasta e fagioli, minestra di fagoli, Tuscan fagioli al fiasco (beans in a flask) or ribollita; or Virtù, the soup found in Lazio / Abruzzo, made of cheap cuts of meat (pigs' ears and feet) and various vegetables, beans, lentils and chickpeas; or chickpeas as a puree, as flour for flatbread or whole in soups: Italians all over the country enjoy eating legumes.

The dried varieties that are easy to store are used most widely - here too, the basic approach is in evidence: using the simplest ingredients and methods to achieve the best results.

500g/1 lb of small pasta such as Gobbetti or Ditalini

Boil the beans in the overnight water for 10 minutes. In the meanwhile, fry the Soffrito i.e. the onions, carrots, celery and garlic(in small pieces) and Rosemary twig. Mix the both, cook the beans for 1,5 to 2 hours until it becomes soft. When necessary add water.

Add salt after one hour. Once the beans are soft take out the rosemary twigs and half of the beans. Add the canned tomatoes in the rest of the beans and mash the soup. Then add the pasta in the soup and cook it until they are al dente.

Then add the rest of the beans to reach the desired consistency. The Pasta e Fagioli should be thick. Serve it warm or cold with Parmesan cheese and plenty of olive oil.

Variation: To make it more rich, add roasted Pancetta oder Salsiccia into it.

Frittata is an Italian omelet and is one of the classical italian cooking recipes which one can get all over the country. The filling reflects regional preferences - anchovies in Sicily, for example, a Calabrian version with onions and oregano, or frittata alle erbe (with herbs) from Friuli - but what they have in common is that they can be made quickly and used in a variety of ways, whether it's in a buffet, as an aperitivo or as a primo; and, depending on your preferences and the time of year, they can be served hot or cold.

Cut the onions into thin rings, sprinkle salt, pepper and oregano and let it brew.

Braise lightly in oil and and leave it to cool down.

Add salt to the eggs and whisk it with a fork. Then mix the cooled onions in the eggs.

Heat olive oil in a pan, fry the egg mixture over medium heat until it is golden brown. To apply the best, take a pot lid and hang up on the pan, turn quickly and slide back the towelette in the pan. 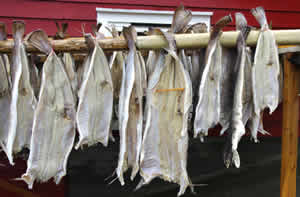 Despite the proximity to the sea there is surprisingly the conserved varieties of the Kabeljaus/Codfish, Baccalà (Klippfish) and Stoccafisso or Stocco (stockfish), which inspire the cooks from Friaul to Sicily and bring forth the classical Italian cooking recipes.

Even though direct proximity to the sea it was not always easy to have fresh fish if the climatic conditions did not permit. And even today, Italy is the largest importer of stoccafisso, now it mostly comes from Norway.

Both differ in the type of preservation - the Baccalà, the gutted fish with salt, the stoccafisso preserved in vinegar (stoccafisso is regarded as the nobler of the two). If you order in Venetien and its neighbors Baccalà, incidentally you will get Stockfish - the rarely used dried Klippfish is known as Bertagnin. The preserved fish must be watered for 24 hours before further processing and sometimes upto 5 days and change the water regularly. There are countless number of Italian cooking recipes which are maufactured from Products such as Insalata di Stocco (Salat), Bucatini con lo Stocco (Pasta), Frittata di Stocco (Omelett), Melanzane ripiene con lo Stocco (stuffed Eggplant), Risotto from the oven with mushrooms, potatoes or as a spread on bread and antipasto.

Juice of one lemon

Soak the Baccalà for at least 24 hours, change the water three times a day.

Cook the fish in water for 15 minutes. Then peel, fillet and cut the fishes into small pieces. In the meanwhile, peel the potatoes, cut into cubes and boil with salt separately.

Mix lemon juice, 100 ml / ½ cups olive oil, chopped garlic and parsley. Fill the potatoes and fish in a saucepan and lightly season with salt and pepper and add the marinade over it. Then seal the casserole tightly and shake until the content has a creamy appearance. Serve the lukewarm Branda cujon and garnish it with roasted pine nuts.

Enough as a starter for eight people.

The Romans baked the panis focacius, and do so without a Oven; the focus is on the domestic hearth/fireplace, it was pressed flat on a slab and covered with fire. Then mix it with olive oil, salt and other ingredients. Yeast dough bread has different names in different regions; in the north Pizza Genovese, in the Emilia-Romagna Crescentina, in Venice Fugassa, in Apulia Pudicca, in Tuskany, in Umbria and in Latium Sciacciata (the squashed). Focaccia is less a side dish such as bread, but a separate meal for breakfast or as a snack, like an aperitif.

Put flour in a mixer bowl and stir it with dough hook, press in the middle to make a hollow. Pour water and oil into the hollow, crumble the yeast and wait until it has dissolved ( mix the dry yeast directly with the flour).

Add pepper and salt and knead for about 10 minutes until the dough is smooth and elastic. If the dough is too sticky, use a little more flour.

Dust the top surface with flour so that the cloth does not stick. Cover it with a damp cloth and put it in a warm place for 1 or 1 / 2 hours until the dough has reached twice the volume.

Grease a baking sheet with olive oil. Knead the strips of Lardo di Colonnata (very aromatic Italian pork stomach). Sprinkle flour in the baking sheet cut a piece of cake of about 25 cm diameter, with rosemary needles from above and put it under a damp cloth to rise again twice for about half an hour (The prepared dough can be kept up to six hours in the refrigerator).

Back to Italian Cooking Recipes (Part 1)

Back to Sunday - the Blog